OMG! Is it Saturday already? Better catch up on the blogging…..

Our 10 days in Florence were delightful! We had a few gorgeous days, and we had a western Oregon version of a Nor’Easter, those fearsome gales that blow onto the New England coastline in the fall. Ours was 50-70 mph winds with a couple inches of rain, topped off by a dusting of corn snow. Corn snow is like sleet or hail, but colder and softer. Anyway, it accumulated up to about ½” on our truck and on the dock where we planted our crab trap. 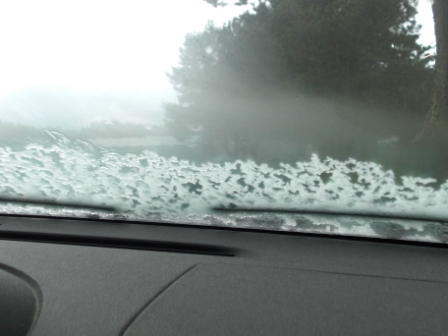 Corn snow on the windshield

Oh yeah, the crab trap. We had luck with our Crab Max hand-thrown traps. Wendy got a nice keeper Dungeness off of the Winchester Bay Coast Guard Pier. 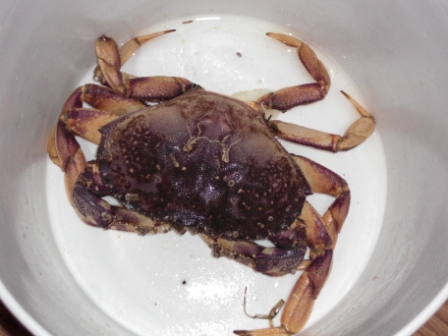 But while we were shopping for boots at Fred Meyer we saw some folding box traps for sale ($20, no sales tax in Oregon!) and got one. We also found really cheap turkey necks at Safeway (go figure, turkey necks at THIS time of the year!) which turned out to be great crab bait. We hauled a half dozen keepers out from under the marina dock in 3 days and have either eaten them or shucked the meat and frozen it for future consumption. Yummy!

We also found a great little burger joint in Florence. We don’t eat out much on the road; we prefer to make our meals. We couldn’t resist The Hot Rod Grill however, complete with a full line of ’53 to ’63 Chevies (at least the front ends) and an authentic Bob’s Big Boy statue that was bought at auction in California. Yup, that’s a car crashing out of the left side. Andyou can’t see it from here, but there are 2 booths inside made out of ’55 Chevies. 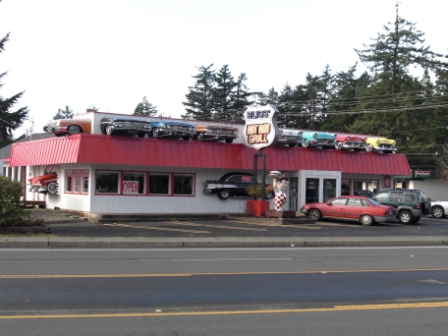 The Hod Rod Grill in Florence OR

We did make a few sightseeing trips. We went south to Coos Bay, but didn’t like it much. Very industrial, which shows off it’s past as the largest timber shipping port in the world until the spotted owl did in the timber industry. And we obviously stopped into Winchester Bay, which was quite small but very picturesque. Most of the harbor seems to be RV park, which we are finding is very common all over Oregon. While we know of only 3 RV parks in the LA area, there were at least 10 in Florence alone. And nearly every highway exit has at least one RV park advertized. It’s kind of strange that we had such a tough time finding one for our stay in Kent WA for Thanksgiving. We far and away prefer the Central Oregon coast, but will have to save our appraisal of the North Coast for another time.

We also dug a few, make that 2, butter clams on the Siuslaw River banks near the marina. Although they were good size, we had to resort to buying a can of chopped clams to make our clam chowder. Wendy added a bunch of lump crab meat (from our keepers) and it was fabulous! It helped that the outside temperature was hovering around 41F most of the time.

We are now in Portland, camped at Jantzen Beach RV on Hayden Island. This place is very nice and clean, with a great staff. It’s also surrounded by the Jantzen Beach Center, a HUGE shopping mall. Since we’re in the market for some warm clothes and an amped-up electric space heater, we will be patronizing this later. We’re here to visit cousin Sue and hubby Larry for a couple of days, and hoping to connect with Wendy’s old buddy Grace from her La Leche League days. Then we’re off to Seattle (Kent) for Thanksgiving with the fam! We’re just a little leery since the weather forecast for the next 4 days has snow in 3 of them, and below freezing temps at night every night. We will get some practice on freeze-proofing the water hose. Thank God our rig is winterized with heated tanks and internally protected water lines. We have also invested in some 1” foam sheets to insulate the roof vents, and are thinking about making some insulated covers for the windows to cover them at night. Every little bit helps!

Speaking of stitchery, Wendy is finding all kinds of novel ways to sew in small spaces. She efficiently uses 3 rooms of our house on wheels for her projects. 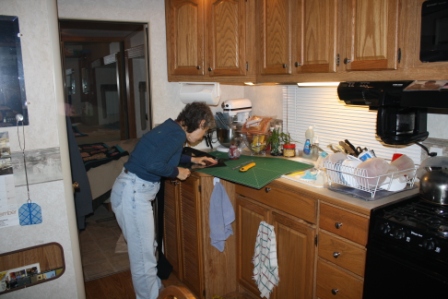 Cutting patterns in the Kitchen

Ironing pieces in the Bedroom

Sewing in the Dining Room

The Kitchen and Dining Room also serve as our Bakery!

We’re off to shop and visit, but not before Tippy gets his $.02 in!