This BS is so Texas!

I struggled to find a title for this installment, so I dug deep in the barrel and settled for something cheap and sleazy that would be eye-catching. If you have read this far, good for me.

It’s not what you think. While it IS Texas, it ain’t the BS you think it is. I wouldn’t be reaching to think that virtually NONE of you had guessed Barbeque Smoker. So, spoiler alert, that’s what this is, a short history and introduction to Stanley, our Texas Barbeque/Smoker. You need to read this, really, and for sure don’t miss the thrilling conclusion (spoiler alert: cliffhanger). This is really just a cheap, titillating buildup to my next blog on the hairy and exciting road trip to rescue Stanley (wait for it……), which has lots more pictures and way more stinging commentary and absolutely hilarious one-liners. I gleaned all of this great blog-marketing strategy from the lead-up to the recent NFL draft. You’re welcome. Buckle up, it’s down to business.

I acquired Stanley in the early 1980’s. My brothers had been making a living trucking double trailer loads of sweet, wholesome hay from California to the hungry bovine herds of drought-plagued central Texas. The trucking “to” part made them money, the return trip, not so much. So they found an enterprising solution to the return trip after they found the LyfeTyme BBQ Company in Uvalde, Texas. (If you are using Google Maps to find this little burg, make sure you zoom way, way in.) LyfeTyme builds these beauties out of 20” or 24” diameter natural gas pipeline materials, really durable stuff. Their name and logo says it all:

That grizzled, old guy bought his “when he wuz young”, and so did I. I’m expecting that my grandchildren will be cooking on Stanley well after I’m gone. Assuming, of course, any of them survive the fight over the inheritance.

The deal for my brothers was to buy a few LyfeTyme smokers, strap them to the empty hay trailers, and sell them in California, a land where money flows the way water USED to, and every real man absolutely needs a 650 pound, $1600 grill to get those burgers and weenies just right. I wasn’t actually one of those guys until my brothers each acquired one, and then, of course, I HAD to become one of those guys or risk permanently losing my standing in the family pecking order. It’s hard to stand out in a crowd of 5 brothers. Plus, I was getting it for $400 with no charge for freight.

LyfeTyme has a big lineup of smokers, here’s the one I chose: 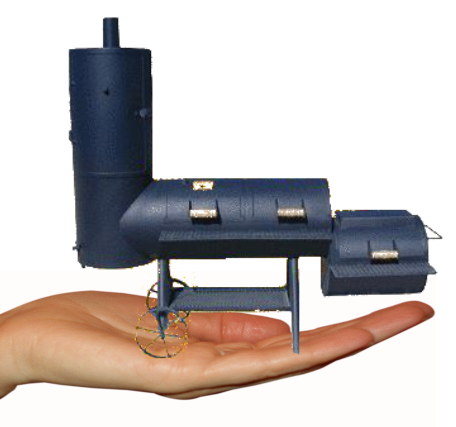 He is, of course, much larger in real life. But I was going for a “handed down from the heavens” thing, and might have missed it by a little.

Stanley has done almost as much traveling as I have, and that’s saying a lot. He was delivered to me in Sunnyvale, California, where he was the testosterone Star of many family and neighborhood events. When we moved to Lake Oswego, Oregon, he went along strapped to the back of the moving van. We relocated to West Acton, Massachusetts (Boston), and he crossed the country, again strapped to the back of a moving van. What a way to see the USA! Another moving van, with Stanley bravely hanging arear, took us back across the country to Redwood City, California (San Francisco). After a couple of years of super-macho weenie roasting, Stanley was then foster parented out to a chef-friend of ours in Antelope, California (Sacramento), where he smoked turkeys and briskets for a few years. He was then loaned to my ex-brother-in-law who had opened his own meat-centric restaurant (The Henweigh Café) in Sebastapol, California (wine country). (Are you wondering about the origin of the name Henweigh? It’s like a knock-knock joke: (me) “Oh, that’s just like a Henweigh!” (you) “What’s a Henweigh?” (me) “About 2 pounds”. It’s a lot funnier after 3 or 4 margaritas.)

He served for 5 years as the center piece of the menu, with a different smoked meat every day as the nightly special. But, alas, the restaurant didn’t make it, and after it closed Stanley was left in the rain in the back of the Henweigh for a few years, with no purpose in life, and no smoke in the stack. Sad, sad, sad. Everyone, even someone from Texas, should have a purpose in life. And, more importantly, never be separated from family. And don’t look at me like that just because I speak of Stanley as a “somebody”. He is, and always will be, an honored member of our family.

So, I finally come to the end of the background and history, and finally get to hype the heck out of the real reason you suffered through this blog: Stay tuned for the next brilliant installment where I receive my Mission from God to rescue Stanley and bring him back to the family fold where his purpose in life can be resumed. Unless, of course, the NFL calls and needs a new marketing hype guru for the next draft. I’m not going to hold my breath.

Once retired from high tech and education, Warren and Wendy now enjoying part time RV-ing again. Oh yeah, and then there's that un-retired and managing Peoples Storage in Kenmore WA thing.
View all posts by W&W Mudd →
This entry was posted in Uncategorized and tagged California, Texas. Bookmark the permalink.