When Warren set out our route to get to Glacier National Park he was looking for stopping points that were between 300 and 400 miles apart.  That’s how we ended up in Wells, NV…population around 1,300 at an elevation of 5,600 ft. smack in the middle of nowhere!  There’s even a sign on I-80 that bills it as “halfway to everywhere”. But we’re here for 4 days so we figured we’d make the best of our situation. Angel Lake RV promised big-rig-friendly pull through spots, high speed internet, full 50 amp hook-ups, cable TV, great reviews and a great price. It doesn’t look like much but their services are as good as billed, and check out our view.

Angels Lake RV does a great job at a really great price! 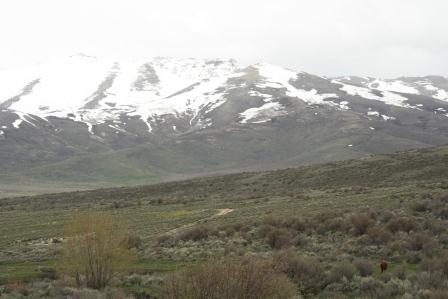 One of many spectacular views from our camp site

Just a few miles short of Wells, we were tickled to see that northern Nevada has their own high rent district. There wasn’t any sign of a town, and we speculated that the local boys were at one point fond of Beverly’s hills and gave her a personal off ramp.

For those who might think poorly of Wells, we’re here to change your thinking. So, in this installation of the Muddscape we take you on an armchair tour of the garden spot of northeastern Nevada. For starters our accommodations were rugged but very sufficient.

Not too fancy, but great utilities and internet!

We ran into a bit of bad luck when the wind whipped open the driver’s door on the truck and sprung the hinges. It would close, but it wouldn’t open more than about 2”. So we spent the first morning here fixing that while the weather was reasonably warm. If you even care, you can check out the details at our Unspringing the Chevy Door blog. Once that job was done, we filled the tank ($3.78 a gallon!) and headed off for a 100 mile loop tour around the area. Wells is the jumping off point for Angels Lake, one of the premier fishing lakes in the western states. But at this time of year the road has about 4 feet of snow on it so we settled for some lower elevation driving. 100 miles sounds like a long distance, but at 85 mph it goes pretty quickly. We saw a total of 4 cars for 98 miles of the trip, and only exceeded the posted speed limit by 10 mph.

The Great Basin is cow country!

One of many working ranches in The Great Basin

To get your oriented correctly for the city tour, here’s the map they offer up on their website at www.wellsnevada.com. That’s right folks, Wells in on the internet!

Wells is a rugged, scrappy little city full of people with the pioneer spirit. It has a huge supply of motels on the main drag, which I suspect are fully booked during the deer and elk hunting season. It has dozens of fishing streams, lakes, and reservoirs that yield, we are told, giant brown trout, large rainbow trout, and black bass. We are going to test that theory while we’re here. In 2009 there was a 6.3 earthquake that devastated the main part of the city, and it looks like they started to clean it up but abandoned it due to the economy.

Wells is at the junction of I-80, which is the main route between Reno and Salt Lake City, and State Road 93, which runs north and south and is the main route to Idaho Falls and Pocatello. There is a big Flying J truck stop at that intersection which has great people watching because truckers and road-trippers from all over are constantly coming and going. We saw some very interesting vehicles here in just the short time it took to gas up the truck. There were 2 very customized cars with racing numbers on them, a Dodge Viper and a highly modified Porsche that I think were on their way to the dry lake south of town. And there was this little beauty of a trailer custom built for a Harley. 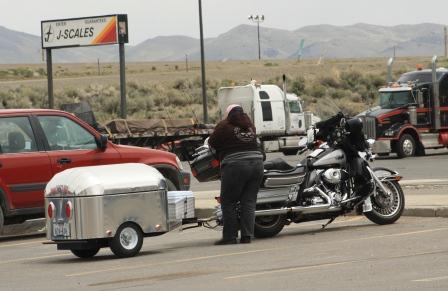 Check out the caboose on this baby!

And what tour of a northern Nevada cow town would be complete without a stop at the Red Light District? See the city map above for the location, it’s a tiny circle on the outskirts. It’s on the other side of the tracks, of course, and is accessible only via a dirt road.

It's across the tracks and down a really nice dirt road

When we drove down the road what looked like the mayor and some of the town council boys were out there with a road grader keeping it in good shape. There were 2 “Gentlemen’s Clubs”, Donna’s and Bella’s. We couldn’t make up our mind which was more charming, they both had their qualities. Bella’s clearly had a more modern and polished exterior with a fancy neon sign, but we think Donna has her beat with her 130 plus years of upstanding service to the community. 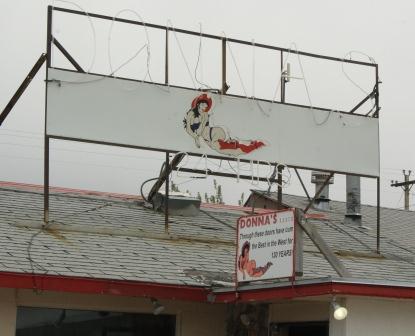 130 Years of Upstanding Service to the Community

This is a major trucking route, and business is apparently good. There are even billboards along I-80 that announce “Truckers Welcome”. While we could clearly see why there was room for more than one bordello, we wondered a little at how Bella’s got her start. Maybe Bella was once one of Donna’s girls but wanted a bigger piece of the action? Why don’t you take a shot at your theory and let us know in the comments section?

We are enjoying our stay out here “halfway to everywhere”. Although the RV park is between the interstate and the railroad tracks, we don’t really hear either. The weather is on the cold side and windy at times. And we are getting snow as I write this. But when it clears and the sun comes out it’s really pretty. The air is very fresh (and crisp), the water is cold and clean, and the people are very friendly. The owner of the park is a nice lady, and her father (who works here with her) has been fishing and hunting these parts his whole life. We are going to get some local knowledge out of him later and use that to see if we can’t fish up some of those tasty big trout they keep talking about.

Tippy has a word or two also. And don’t forget to scroll down below “About W&W Mudd” and give us a big old click on the “Like” button! We are getting noticed because of all those clicks, so thanks!