I had a real tough time coming up with a clever gift for Wendy on Mother’s Day until I had a real epiphany. What mother wouldn’t just JUMP at the opportunity to recoat the roof of an RV with EPDM liquid rubber! This could explain why Wendy is my third wife, but I still think this is really “the gift that keeps on giving”.

This is really a technical blog, full of tips on roof maintenance for other RVers, so we will understand if you click away now and wait for our next installment. But, you never know if there might be a little gem buried in among the maintenance lessons, do you? And don’t forget to check out Tippy. And if you REALLY like us, skip to the bottom and click the “Like” button. We’re still trying to climb the ladder to the top of the Google search page…

Our roof was in dire shape. The previous owner had coated over it with a cheap paint, and last winter had really torn it up. It was blistered and peeling off in giant sheets. So we bit the bullet and decided it needed to be redone before it started leaking.

BEFORE: Winter had really taken its toll

The estimate to have it done by someone else was about $3700, so we researched doing it ourselves and found it to be much more affordable. Because it was so much cheaper we decided to use the best stuff we could get, and EPDM Liquid Rubber from Pro Guard Coatings was the same material as our factory rubber roof. Tip: research all of the companies selling this product, we bought from one offering free shipping and saved a bunch of dough. 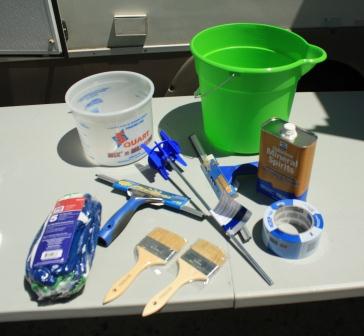 You will need this stuff as well as the EPDM material

We gave it a little forethought and made a list of the tools and things we would need to get the job done. And we decided in advance that it was all going to be disposable since the cleanup promised to be a real bear. Two buckets, one with a pour spout, 2 squeegees (12″ and 16″), a pole for the larger squeegee, some painters tape, a paint mixing wand, a couple of 2″ brushes, a 5 pack of disposable gardening gloves (the type with rubber palms, ours cost $5 for 5 pairs), a big box of cloth/paper rags (at Lowe’s, $10 for a box of 200), and DON’T FORGET THE MINERAL SPIRITS. The only stuff that will really get the goo off of you.

Doing the roof is a 3 step process. First we had to strip off the old coating. Luckily it peeled off in big chunks so this whole part only took 2 hours. Next, we had to scrub the roof with a light soapy water solution, and this had to be done the night before. That only took us an hour. And then, because the weather was forecast to be a little cooler, we jumped out of bed on Mother’s Day and got right to it. A final sweep to clear off a few leaves, masking tape on the rain gutters to keep them from getting clogged up, and we then pre-mixed the EPDM with the catalyst. Because it was only about 60 degrees outside, we mixed in the catalyst and let it all sit for about 2 hours before applying. On a day warmer than 70 degrees, one hour of sitting after mixing is sufficient, but make it at least 1 hour.

The material has a very long working time at 65-75 degrees. We mixed at about 8:30AM and finished about 12:30PM, and the remaining goo still had plenty of work time left in it. The liquid stops setting up below 50 degrees, so if you need to you can immerse cans or buckets of mixed material in an ice bath or your refrigerator to keep it workable for hours, days, even weeks.

We also remembered the rule about not painting yourself into a corner. Start at the front and work back toward the ladder! Wendy used a brush to cut in all of the vents and stuff on the roof, and also to edge the perimeter. I poured the material onto the roof in puddles and used a 16” squeegee attached to a 5’ pole to spread it. The instructions indicate that you can also use a roller, but I found the squeegee to be great at flowing the material onto the flat surfaces. You can push the puddle of goo away from you, and pull it toward you. Slow even strokes with some down pressure keeps the materrial flowing, and it just coveres the bare surface great! Our rig is 36’ long, and has 4 slides that also needed their roofs coated. 2 of the slides are 72” wide and 40” deep, and the other 2 are 72” X 20” deep. We purchased 6 gallons of Liquid Rubber and had well over ½ gallon left when we were done.  By the way, we bought the Liquid Rubber instead of the Liquid Roof. Liquid Roof is advertised specifically for RV roof coating, but the Liquid Rubber is exactly the same material, and without the RV name on the label it’s about $100 cheaper.

Cuttting in the front edge with a brush

Cut in the edges

At last, the finished product

Clean up was pretty easy. All of the stuff we bought for the application got thrown away after the material hardened. Using the disposable gloves kept a lot off of us, and mineral spirits worked like a charm on us and the roof ladder.

The ladder, of course, bore the brunt of the mess

It took the 2 of us about 3 hours total (not counting the time the mixed material sat) to finish the coating part of the job. The peeling of the old coat was about 2 hours, and the scrub job was 1 hour. So we invested about $450 in materials ($350 for the Liquid Rubber, $100 for squeegees, paint brushes, buckets, painters tape, mineral spirits, disposable gardening gloves, disposable rags, and a mixing wand) and 6 hours of our time, including clean up, to save about $3200.

There are lots of videos on applying Liquid Rubber on YouTube. And we put up some more of this job at http://www.youtube.com/watch?v=fKNgsZ4LHyM.

Tippy doesn’t have opposable thumbs, so he couldn’t help us with this job. But he sure knows where to get the information to get it done!