“You may all go to Hell, and I will go to Texas”, says Davy Crockett when he rode off to join the battle for Texas. He died at the Alamo.

We thought we had gone to Hell, even though we had INTENDED to go to Texas. We attended a L-O-N-G bootcamp in Dallas last weekend, and discovered a bunch of things NOT to do in the heat. It was in the high 90’s each of the 4 days, with oppressive humidity, and I could hardly understand which language the natives were speaking most of the time. Add to this being packed into Gilley’s (that’s right, the famous one with the mechanical bull in Urban Cowboy) with 1200 other rabid real estate entrepeneurish types, and the choice between Advil and Morphine becomes academic. We did, however, get a BUNCH of great information, meet a bunch of like-minded folks, and have a great time. Front row seats 2 days in a row! 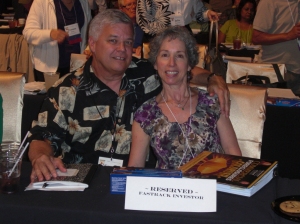 Front row seats for the Bootcamp at Gilley's

As we said, here are some tips about Dallas, heat, and visiting. DO drink lots of water and Sweet Tea! DON’T wear flipflops when you set off to walk “a few blocks” to the Dallas Farmer’s Market after the days meetings “just to get some fruit for the room.” 2 miles or so later you will find out it isn’t a “few blocks”, there are no cabs south of your hotel, and the pavement hovers around 140 when the air is 98. God has not yet invented clothing absorbant enough for that kind of trek. I’m glad the fruit was worth it.

Not necessarily wanting to crowd into group dinners every night, we found some of the finer eating establishments outside the hotel. The highlight of those was Dick’s, “The Shame of Dallas since 1985“. You can’t miss it. It’s packed in between The House of Blues and The Hard Rock Cafe, snuggled right up to Hooters. It’s filled with most of the drunk young women in Dallas, all of whom seem to be having a bachelorette party. If all the wiggly women and spilling drinks isn’t enough to light up your fun meter, they will gladly fit you with a handmade paper hat that sports a fun saying. Wendy’s said “I love blowing bubbles”. Mine said “Hi, I’m Bubbles.” 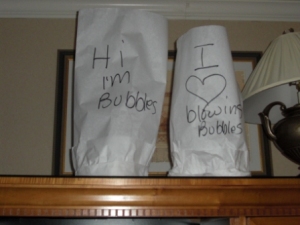 They don’t necessarily TELL you what your hat says until it’s actually sitting on your unsuspecting head. Usually everyone else is only too happy to clue you in.

We’re looking forward to another 3 days of  frantic painting, cleaning and packing. Then we’re off to LA for a week in the rig to celebrate Dylan’s first birthday! Although he just missed being born on the 4th of July by a couple of minutes, we’ll be celebrating on the 3rd. Look for posts! And don’t forget, you can subscribe to email alerts in the “Comments” panel. 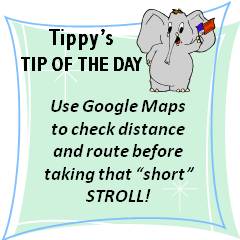