Make that Charleston, South Carolina. Only known as “Charlie” by the locals, and some students and alumni.

We took advantage of geography while visiting Savannah Georgia to take a short road trip up the coast to Charleston, another beautiful antebellum southern city. Charleston is older than Savannah, and quite different having grown “organically” to the needs of the growing population rather than being well planned out from the beginning like James Oglethorpe did in Savannah. Charleston saw a lot of action in the Civil War, and suffered lots of damage because of it, so it has an eclectic mix of old, “replacement”, and new architecture.

We started our tour off with brunch at The Park Café, an out-of-the-way small joint that came recommended to us, and the recommendation included “arrive early”. It’s a very popular, neighborhood place, but we got lucky with a parking spot right up front, and only a 10 minute wait. As we usually do, we ordered the house specialties: AEbelskiver (a Danish popover) and Avocado Toast. DEEEElish! I also chowed down on the house special Corned Beef Hash. It was also obvious where the name derived from, with the walls looking just like a park! The empty plate below is where the AEbelskiver USED to be. Yum! 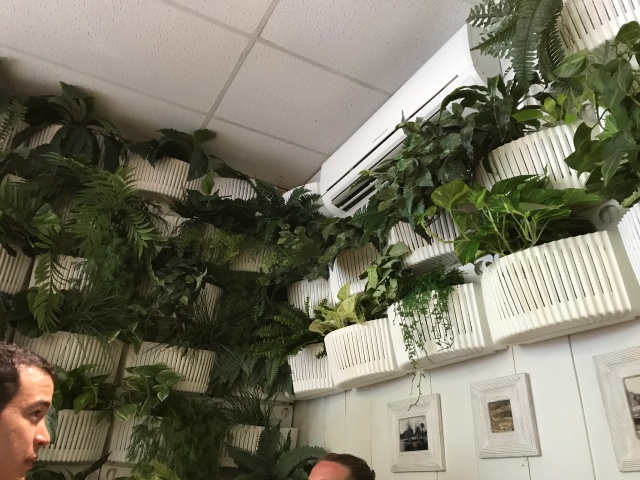 Charleston seems much more popular than Savannah; it was much more crowded, and the Free Walking Tours were booked solid for all the time slots. We compensated by swiping the tour itinerary off the website, and pinning it into Google Maps. Then we conducted our own tour, on our own schedule! We picked up the pace a bit, blowing by the other tours, who spent way too much time explaining what a French Huguenot was. We didn’t really care all that much, and still don’t really know who or what they were, except that they have a church in Charleston (the pink one below) and we couldn’t have won the Revolutionary War without them. Thank you, Huguenots! I’m assuming that, being French, they liked doughnuts, and so I feel an affinity for them. I think that about a lot of cultures and doughnuts. Of course, the French weren’t the only ones with a church or two in town. There were a lot of Irish in Charleston too, and they must have attended St. Patrick’s Church (on the right below).

The old historic district of Charleston is dominated by the Charleston City Market, which is exactly what it sounds like, 3 blocks of tourist shopping. It used to be the heart and soul of colonial Charleston, and much of the surrounding coastline, but retains very little of the flavor of that age. Surrounding the market are countless sights, which on our custom-hacked walking tour was just a little over 1.5 miles, very compact. The day was warm at 82°F and 100% humidity, so we made our way to Battery Park, the site of the old fort built there to protect the city. The fort is gone now, but some nice monuments and a few remnants remain. I couldn’t imagine my boat getting hit by one of the cannonballs shot from a shore-side mortar. Those are some big balls! 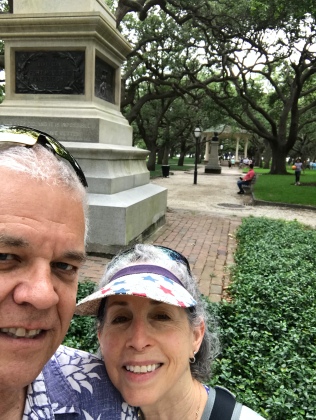 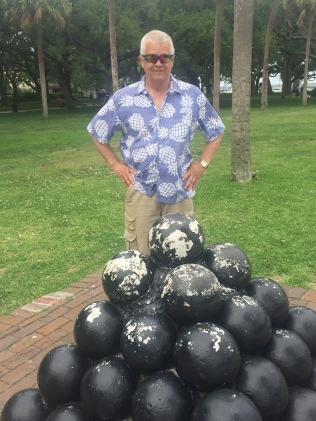 One of our favorite things is to find a really, really old cemetery and read the tombstones. Charleston didn’t disappoint. This burial ground was found surrounding the Circle Church, belonging to yet another Protestant sect, and still in use. Many of the graves dated to the 1700’s.

No, this isn’t what it looks like. As in the other 2 cities on this visit, I noticed a pretty high density of cigar butts in the gutters. I realized that South Carolina is also Shade Tobacco country, and lots of cigars are still rolled about these parts. If only folks would learn to put them where they belong, I wouldn’t have constantly been all “Look OUT!”, only to then realize someone had just failed to curb their cigar properly. 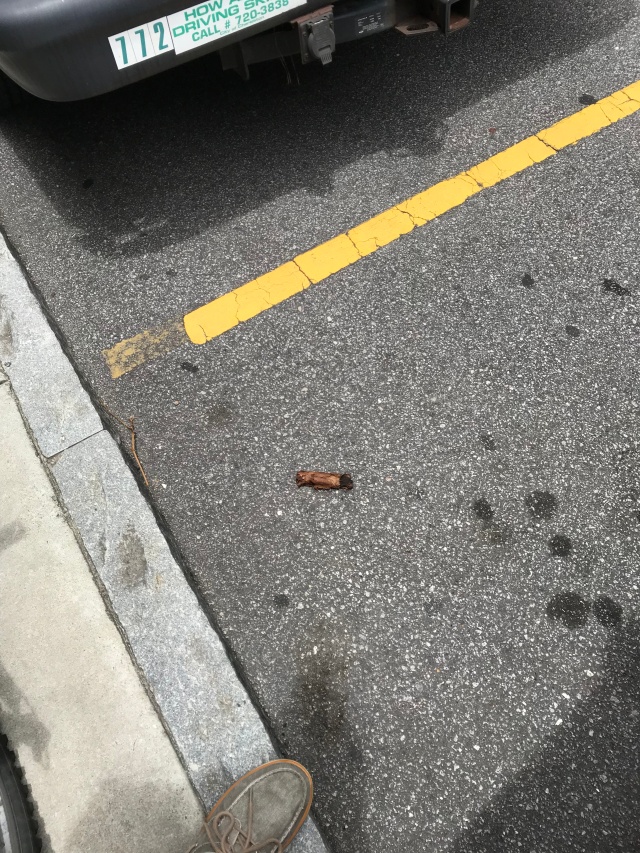 Winding back along the water front, we wound up at the Pineapple Fountain. The Pineapple is the state symbol of South Carolina, although we never for sure found out if they grow them there. They sure grew a lot of cotton and rice! Also on the waterfront is a pier with three covered verandas that have large swings in them so a tired tourist (or two) can take a break and enjoy the expansive water views, just imagining the old days when this harbor was full of sailing warships and fishing boats. 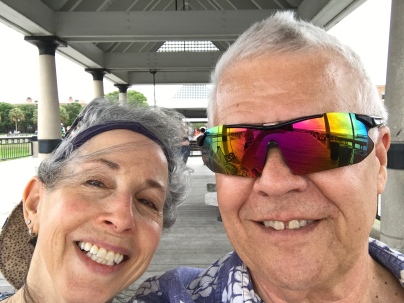 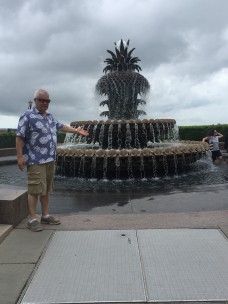 Wendy was excited to find Queen Street, while we were standing on King Avenue. That put us in the French Quarter, which looked a whole bunch like New Orleans. Those French sure liked a specific kind of architecture, along with their doughnuts. There might also have been some teensy French people there, because we found this old-world Tiny House on the outskirts of the French Quarter, dwarfed by some of the “replacement architecture” that sprang up after the neighbor’s homes were either burned or fell into ruins. The Three Little Pigs were right, or at least one of them was: brick houses rule! 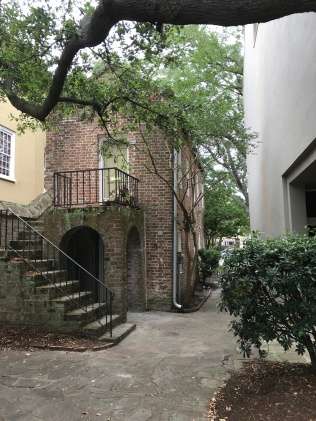 We dined at the Charleston Crab House, which we managed to get into just before the skies opened up on us. The building is historic, which becomes obvious as you walk the wooden floors and climb the original wooden staircase. The food and service are excellent. We wolfed down the fried blue crabs, which are eaten whole shell and all since they are harvested while molting and still soft-shelled. Yummy, and not too pricey. End of the day’s road trip, back to Savannah!

Tippy liked Charleston too, and discovered an alternative to the outrageous parking fees!

Once retired from high tech and education, Warren and Wendy now enjoying part time RV-ing again. Oh yeah, and then there's that un-retired and managing Peoples Storage in Kenmore WA thing.
View all posts by W&W Mudd →
This entry was posted in Uncategorized. Bookmark the permalink.